Why we are researching Lyme disease

The Observatory monitors and evaluates climate change adaptation to produce indices for steering individual and organizational adaptation in Quebec.

Identified for the first time in Quebec in 2007–2008, Lyme disease is the most commonly reported vector-borne disease in temperate zones. Since its identification in North America in the 1970s, the Ixodes scapularis tick infected by Borrelia burgdorferi (the bacteria responsible for Lyme disease) has been spreading farther north into zones where it had been absent so far.

Our research on Lyme disease 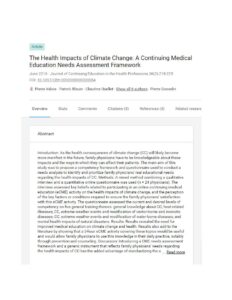 The Health Impacts of Climate Change: A Continuing M...

Introduction: As the health consequences of climate change (CC) will likely become more manifest in the future, family physicians have to be knowledgeable about these impacts and the ways in which they can affect their patients. The main aim of this study was to propose a competency framework and questionnaire used to conduct a needs analysis to identify and prioritize family physicians' real educational needs regarding the health impacts of CC. Methods: A mixed method combining a qualitative interview and a quantitative online questionnaire was used (n = 24 physicians). The interview assessed key beliefs related to participating in an online continuing medical education (eCME) activity on the health impacts of climate change, and the perception of the key factors or conditions required to ensure the family physicians' satisfaction with this eCME activity. The questionnaire assessed the current and desired levels of competency on five general training themes: general knowledge about CC; heat-related illnesses; CC, extreme weather events and modification of vector-borne and zoonotic diseases; CC, extreme weather events and modification of water-borne diseases; and mental health impacts of natural disasters. Results: Results revealed the need for improved medical education on climate change and health. Results also add to the literature by showing that a 3-hour eCME activity covering these topics would be useful and would allow family physicians to use this knowledge in their daily practice, notably through prevention and counseling. Discussion: Introducing a CME needs assessment framework and a generic instrument that reflects family physicians' needs regarding the health impacts of CC has the added advantage of standardizing the assessment procedure.
Lire l'article 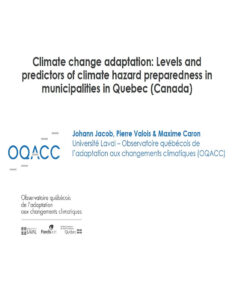 With climate change, the frequency and intensity of certain climate hazards will increase, leading to greater impacts on the health of urban populations. Although cities can adopt various climate change adaptation (CCA) measures (e.g. urban/land-use planning against the effects of urban heat islands), little is known about the progress made in this regard, because of a lack of valid CCA measurement and evaluation tools, as well as organizational factors leading some cities to action and others to inaction.
Lire l'article 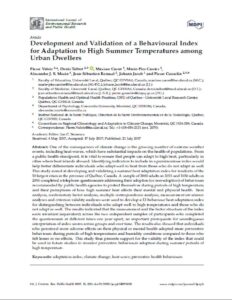 Development and Validation of a Behavioural Index fo...

One of the consequences of climate change is the growing number of extreme weather events, including heat waves, which have substantial impacts on the health of populations. From a public health standpoint, it is vital to ensure that people can adapt to high heat, particularly in cities where heat islands abound. Identifying indicators to include in a parsimonious index would help better differentiate individuals who adapt well to heat from those who do not adapt as well
Lire l'article 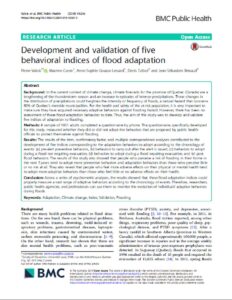 In the current context of climate change, climate forecasts for the province of Quebec (Canada) are a lengthening of the thunderstorm season and an increase in episodes of intense precipitations. These changes in the distribution of precipitations could heighten the intensity or frequency of floods, a natural hazard that concerns 80% of Quebec’s riverside municipalities.
Lire l'article 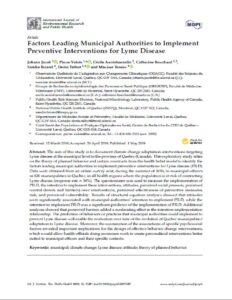 The aim of this study is to document climate change adaptation interventions targeting Lyme disease at the municipal level in the province of Quebec (Canada). This exploratory study relies on the theory of planned behavior and certain constructs from the health belief model to identify the factors leading municipal authorities to implement preventive interventions for Lyme disease (PILD)
Lire l'article 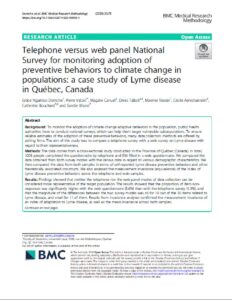 To monitor the adoption of climate change adaptive behaviors in the population, public health authorities have to conduct national surveys, which can help them target vulnerable subpopulations.
Lire l'article

Weather hazards in Quebec and everywhere else in the world are disrupting our ecosystems and causing major health issues. To learn more about, consult this section. Information, reports, articles and newsletters are available under these topic headings.